Groups are roles that users can join and leave whenever they want by using the group command.

Only users with the Manage Roles command can create and delete groups, while anyone can join/leave them. Users can create a group from a role higher than their highest role.

The bot requires Manage Roles permissions in order to assign or unassign roles.

Groups can be created using group add. The commands expect only one parameter, the group's name.

Once a group has been created, the role can be renamed as much as you want without the need to reassign the group. However, users always have to type the name (or id) of the group to join, so keep that in mind before using any special characters.

To join and leave groups, the user has to use the command group, specifying the name of the group. 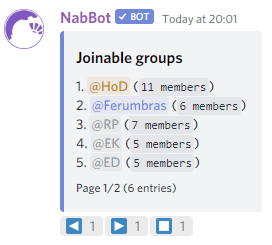 Here are some example uses for groups: